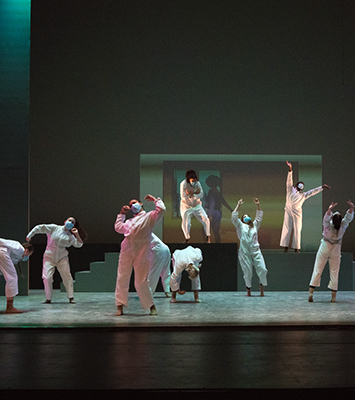 In our new world of producing virtual rather than in-person performances during the pandemic, there is much to be learned. Daniel Massey, a senior pursuing a BFA in sound design and technology who studies with Krannert Center’s Assistant Audio Director/Video Director Alec LaBau, recently had the opportunity to serve as both music composer and sound designer for the livestreamed November Dance 2020. The concert consisted of four mainstage dances, each of which were livestreamed twice on consecutive evenings. With previous experience creating music for dance, he said that he felt extra fortunate to design November Dance, because it was the only mainstage show with sound design by a current student this fall.

While Massey initially composed the music for three of the dances, the fourth choreographer had originally intended to also use two well-known songs—“Blackbird” by Bobby McFerrin and “What a Wonderful World” sung by Louis Armstrong. With only two days to spare and still no progress on obtaining the streaming rights, the decision to replace the popular songs with originally composed music was made.

Massey jumped at the challenge. Working on the audio technology through Zoom, he strove to create music that would easily adapt to the original choreography. To replace “Blackbird,” he developed music with the same beat per minute, keeping the sound similar at the bass level and some basics of the original song. The recording of “What a Wonderful World” began with spoken word before the song, so he incorporated a couple of lines spoken by one of the dancers and a recorded poem reading. The dancers were able to rehearse to Massey’s compositions the day before the performance, and thanks to good communication among all involved, it flowed perfectly. Massey said, “The time constraint made it a bit stressful, but I love the work and the process of focusing to get it done on time. I think of the quote, ‘Choose a job you love, and you will never have to work a day in your life.’ (Confucious). That’s how I feel about the career I am preparing for.”