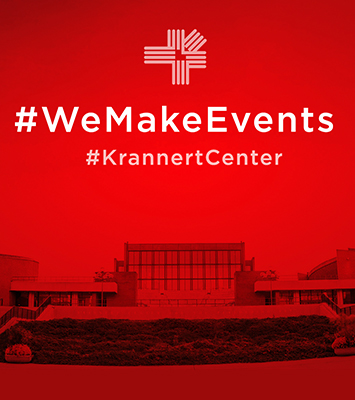 Krannert Center for the Performing Arts and Illinois Theatre are joining artists and arts organizations nationwide to raise awareness about the economic plight of all those who work in the live events industry and the consequences of the COVID-19 pandemic on their lives. On Tuesday, September 1 from 9pm until 11pm (local time), over 1,500 venues, structures, and residences will be lit in red light to raise public and media visibility in support of the live events sector. The North American event comes on the heels of the August 11 event, “#WeMakeEvents Day of Action” when over 700 buildings were lit in red across the United Kingdom, calling attention to the same plight facing the live events industry there.

At Krannert Center, lighting faculty, staff, and students will light the Amphitheatre, including the windows of the upper balcony lobby of Foellinger Great Hall. This display will be visible from Goodwin Avenue from 9pm to 11pm on Tuesday, September 1. The community is invited to drive by and photograph the display and share their images on social media using the hashtags #WeMakeEvents, #KrannertCenter, #IllinoisTheatre, and #SaveOurStages.

Brant Murray, Chair of Lighting Design and Technology for Illinois Theatre, says that, “We are participating in this national event at the local level to help raise awareness and advocate for all of those in the live events industry who are in crisis. It is extremely important that all of our students become engaged citizens, especially here at Illinois Theatre, where our student actors, designers, managers, and technicians will graduate to move on to working in the live events industry. This will be a student designed and executed event, with Krannert Center and Illinois Theatre faculty and staff helping to facilitate and support the event. Krannert Center is our home, and the building only truly lives when it is activated. We are lighting up portions of Krannert Center in red to activate the building as a symbol on the local, regional, and national level. However, the focus of this event goes beyond the arts. Locally, many other live events have been canceled. For example, on Tuesday night we also represent those who work live events at State Farm Center and Memorial Stadium: such as the ticket takers, concession stand operators, security personnel, and facility staff. In Champaign and Urbana, we also represent those rental venues which have canceled events, and who employ people such as caterers, florists, and truck drivers. On Tuesday night, we represent the millions of Americans in the live events sector who remain unemployed.”

Be An Arts Hero, an American grassroots coalition of arts and cultural workers, reports:

As theatres, concert tours, festivals, opera houses, performing arts centers, trade shows, and other live events as well as film and television production remain closed, or open on a very limited basis, the entire industry is impacted, from designers, technicians, programmers, and stagehands to rental shops, manufacturers, and distributors of entertainment technology. The first industry to close last March—live events—could be the last sector to re-open due to the COVID-19 crisis. #WeMakeEvents and #ExtendPUA represent a major call to action on Tuesday, September 1, 2020, imploring the United States Congress to pass the RESTART Act (S.3814) as quickly as possible, offering economic relief to the Live Events Industry, which has been shuttered since March, 2020, putting millions of people out of work.