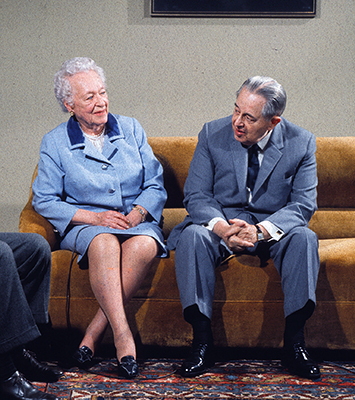 Herman Krannert was a University of Illinois College of Engineering graduate who made a name for himself in the shipping business—in particular, by pioneering the use of corrugated cardboard through his Inland Container Corporation. In the early 1960s, Herman and his wife Ellnora (for whom our guitar festival is named) decided it was time to honor Herman’s alma mater with a new gift. The University of Illinois brought several ideas to the table, among them a new engineering laboratory, a conference center, and an expansive, inclusive home for the performing arts at Illinois. In the Krannerts’ own words, “We chose the Center for the Performing Arts because we are convinced that education through participation in culture is one of the most rewarding and enriching experiences people can enjoy—and, in these complex times, a most needed one.” Nearly 50 years later, these sentiments continue to resonate, and the same spirit that guided the Krannerts’ decision has been made manifest in all those who continue to sustain the Center through memorial gifts, estate gifts, corporate donations, Marquee Circle and Loop membership, and performance and initiative sponsorships.

What can we do together today that will impact the next 50 years?