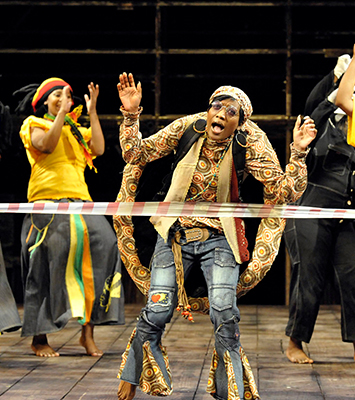 Isango brought Krannert Center audiences joyfully to their feet in 2014, and the company returns to the Center on Tuesday, October 1, 2019, with its vibrant and comedic turn on Aesop’s Fables, which has been hailed as a “stroke of genius . . . a beautiful modern African aesthetic . . . a seamless piece of unique theatre” by South Africa’s Sunday Times. Based on a brilliant script from playwright Peter Terson, the expressive tale portrays the ancient Greek story of a servant on a journey to Mount Olympus, contextualized in the recent history of South Africa and sung in English, Tswana, and Zulu. Audiences can travel with Aesop as he encounters a host of colorful animal characters, such as the tortoise and the hare, and learns the balance of liberty and responsibility in this contemporary, playfully energetic, and beautifully rendered music, theatre, and dance production that is “a joy throughout” (Evening Standard, London). This public performance is recommended for ages 5 and up and compliments the Center’s daytime Youth Series performances for schoolchildren on Tuesday and Wednesday, October 1 and 2.

Outside of South Africa, Isango Ensemble has performed in Australia, Austria, France, Germany, Ireland, Italy, Japan, New Zealand, Norway, Singapore, Turkey, the United Kingdom, and across the United States. The group has partnered with The Global Fund, raising funds to accelerate the end of AIDS, tuberculosis, and malaria as epidemics—directly impacting programs in countries most in need.