Showcase: The Heist | Krannert Center for the Performing Arts | University of Illinois at Urbana-Champaign 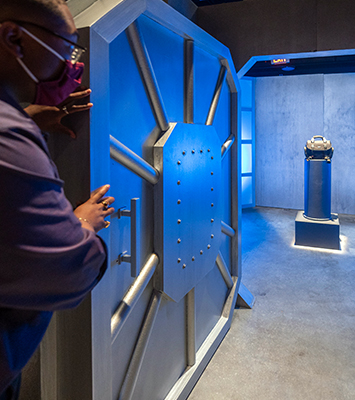 In April 2021, Illinois Theatre produced The Heist: A Theatrical Escape Room—an innovative, interactive experience where the audience became live-action role players in an escape room scenario that involved a secret vault in Krannert Center, a planned heist, and a simultaneously occurring Donor Gala to honor a leader in the technology industry. Compliance with COVID-19 safety protocols limited participation to four University of Illinois-affiliated players in each of the 23 escape room events over a 10-day period. Five student actors played the roles written into the game to develop the storyline and to give instruction and clues to the four players as they worked their way through the game. See the digital program for more information about the production team.

Amber Dewey Schultz, Krannert Center’s assistant production director, served as concept developer and game designer for The Heist. Read Promenade Showcase's interview with Schultz below to get behind-the-scenes details about the event.

Q: How did you manage COVID-19 restrictions?
A: The entire concept was built around COVID-19 restrictions. At the start of the game, each of the four players was given a bag of tools—everything they would need to succeed at their mission. There was no need to search for items. Instead, the players had to figure out what the items were and when to use them to overcome each obstacle. They couldn’t share tools, so communication was very important as they had to work together to solve each puzzle.

Also, the scenery was designed with six-foot distancing in mind. Masks were incorporated into the costume design. The actors in the production gave instructions throughout about distancing and capacity in certain smaller spaces. Between performances, all touched items were cleaned, and we used UV light to sanitize the space. 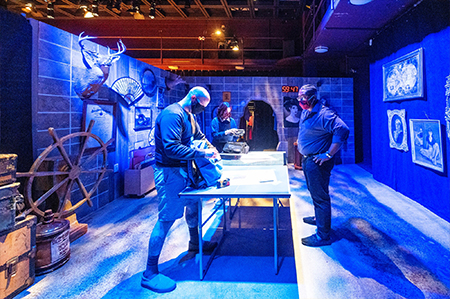 Q: How many clues, and how did teams work together?
A: There was a total of 15 puzzles/obstacles throughout the experience. Each puzzle was designed for specific player characters to complete them. With many of the puzzles, each player only had part of the information or item needed to solve it, requiring them to work together. While we had distributed the tools because of COVID-19 precautions, we found that it balanced the experience among the players. All players needed to participate equally for the group to succeed.

Q: How long did it take, shortest to longest?
A: The fastest group, which was one of the last to play, finished in 40 minutes and 45 seconds. The longest was 56 minutes and 49 seconds. All of the groups “won” and completed the whole experience, even though we had four different endings planned depending on how far a group got through the story. 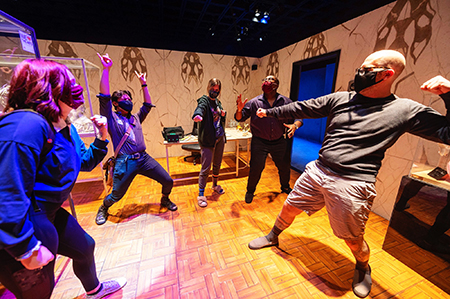 Q: What did you change between shows?
A: We had playtesting throughout the process, which is very different than a traditional theatre process. After the puzzles were solidified for The Heist, but before everything was fully built, we had virtual playtesting sessions where we hosted Zoom-based versions of the experience for groups of four. During those virtual games, we were able to gain insight into how players would play the game, where they became frustrated, and what they enjoyed the most. We learned so much during those playtesting sessions! Puzzles that we thought would be completely obvious to everyone were sometimes very confusing to the playtesters. While the core of each puzzle remained the same, we altered or simplified elements to make a more rewarding experience. We also added playtesting into our tech/dress process. The puzzles were locked in by that point, but we adjusted positive and negative feedback, such as adding a positive computer beep when a group successfully opened a door. By the first performance, the show was “locked,” meaning no more changes could be made.

Q: What special designs and computer techniques were used for The Heist?
A: We had a whole new category of design for this production, which we called “integration design.” This included using various sensors (movement, light, magnet, etc.), which we have never used on a production here before! There were also two interactive computer sequences that were coded by the student integration designer.

Really, this was all a grand experiment with introducing interactivity into a production—one that we learned a great amount from and was ultimately very successful. I’m looking forward to integrating what we have learned into future interactive, immersive productions!

Q: Can you add some of the funny quotes overhead from performance reports?
A: There are so many funny quotes to choose from! Here are a few:

Player: “I’d say thank you for your help, but it was my idea.”
--
Player: “Not to brag, but I blew up the vault.”
--
Hawk (the character who helps the players in the experience): “Why would you bring a tool you don’t know how to use?”
Player: “Why are you giving us vague hints instead of just telling us the plan???”
--
Hawk: “Do you understand?”
Players look at each other.
All Players: “No.”
--
Player: “What are these? They look like necklaces. Oh, never mind. They’re explosives.”
--
Player: “I could blow up the vault. I’m the safecracker.”
Hawk: “That’s not safecracking. That’s safe destroying.”
--
Player: “STOP FIGHTING. WORK TOGETHER. WE ARE ON A SCHEDULE.”