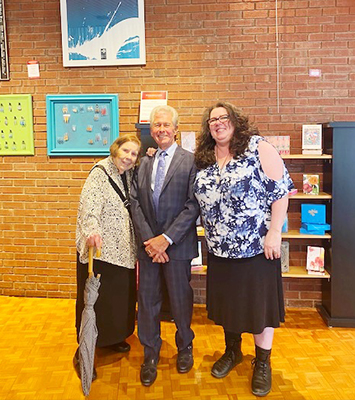 Because of changes in the marketplace and in available resources, as Krannert Center reopens to the public, Promenade will not reopen as a gift shop after a long and distinguished run. We deeply thank all of the shoppers and staff who helped to create a very special place over the course of almost 40 years.

Creating a gift shop in the Lobby was the vision of former Krannert Center Director Michael Hardy who came to the Center in 1979. With the help of his assistant Suzanne Skaggs in planning the concept and “personality” of this gift shop, Promenade opened on November 29, 1982, with Suzanne as manager/buyer. Three years later, she was joined by her daughter Kate Weatherly as assistant manager, who assumed the manager/buyer role in 1994 when Suzanne retired. The two teamed up to find a wide variety of appealing merchandise—eclectic, exotic, fun, fascinating, and tasty—that would appeal to patrons and students of the performing arts as well as anyone looking for a unique gift or a special treat for themselves.

When Kate became manager, Zia Moon joined the team as her assistant/buyer. In 1995, Dale Turner came on board as manager/buyer, and Zia remained as his assistant/buyer. She became manager/buyer when Dale retired in 2017 and has been there since, locating distinctive and innovative merchandise for the shop and creating intriguing showcase displays. Zia said, “In a pre-pandemic reconfiguration, we took a more focused view and began selling not only merchandise that was created from recycled aircraft, car, and watch parts, but also merchandise that donated to other causes such as Education Without Borders, Rainforest Alliance, and others. We also sold merchandise only found here in our community, resident producer (Theatre, Dance, and Lyric Theatre) and School of Music merchandise including faculty CDs, Krannert Center Student Association items, and featured local artists from Allerton Park photography club. We were also very proud to sell ANVIL jewelry, because for the first time ever, part of the proceeds benefited the University of Illinois Pollinatarium on campus.”

In 2017, Promenade also became a showcase to highlight the ecosystem of Krannert Center: its history, the students who study here, the productions created here, and the work that emerges from its shops, classrooms, and venues. The displays, featured in Promenade, the Lobby, and on KrannertCenter.com, provide rich opportunities to share Krannert Center's work and history and give patrons a peek into all areas of the Center. It is still being determined how the Promenade space itself can best be configured into Krannert Center operations, but staff looks forward to continuing this showcase of the creative process.

While Promenade is closing, Zia Moon will remain at Krannert Center using her talents and skills in other capacities. Thanks again to all of you who have been Promenade customers over the years. We look forward to seeing you at Intermezzo cafe and at future in-person events as the 2021-22 season develops.