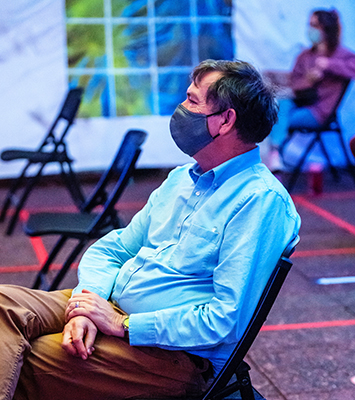 Acting and Theatre Studies Professor Tom Mitchell is a noted scholar of 20th-century American playwright Tennessee Williams and has staged numerous Williams productions for Illinois Theatre at Krannert Center for the Performing Arts. For the past two decades, Mitchell has been researching Williams’ early work in particular and uncovered a story called Why Did Desdemona Love the Moor?, which he had become aware of by reading Williams’ journals, letters, and the biography Tom: The Unknown Tennessee Williams by Lyle Leverich.

Mitchell was particularly drawn to the piece because the complete 23-page story had an additional 50 pages of notes detailing revisions to the piece. It features a narrative that follows a young, white Hollywood starlet and her relationship with an African-American writer in the 1930s. Mitchell notes that “Williams had roots in the Mississippi Delta and didn’t trivialize the racial difference or rely on stereotypes in the way many writers might have at the time. This fit in with several other stories by Williams that also deal with African-American characters and racial themes. The story also depicts an openly gay character who speaks openly about his love life. I had not read anything by Williams so early in his career that was so frank.” Mitchell surmises that both Williams and his agent probably considered the play’s themes too sensitive for readers at the time, causing them to abandon the idea of publishing the piece.

Mitchell went on to publish an article in the Tennessee Williams Annual Review about the story and was invited to stage a production of the work featuring Illinois Theatre students for the Provincetown Tennessee Williams Festival, intended to take place in September of 2020. In light of the COVID-19-related cancellation of the festival, Provincetown has instead been highlighting performances that have been created in other locations. September 24-27, Mitchell led a four-person cast in a staged reading of Why Did Desdemona Love the Moor? in the off-hours at the COVID testing tent location outside of Krannert Center for socially distanced, masked faculty, staff, and students of Illinois Theatre. Graduate students around the country are also reading the play and participating in Zoom presentations and discussions to further the discourse surrounding this emerging work.

In October, Illinois Theatre will be offering its first ticketed, virtual performance featuring the production of Psh*tter! A Drinking Song for the Year of Our Lord 2020, which had been originally slated for spring 2020. Ticketing details will be announced soon at KrannertCenter.com.