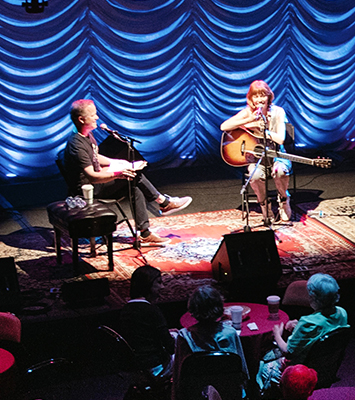 Guitarist Steve Dawson is no stranger to Krannert Center audiences. He’s a two-time ELLNORA | The Guitar Festival alum, and one of his beautiful compositions was used throughout the spring of 2019 for Krannert Center’s 50th-anniversary celebrations. The Come Home to Krannert Center anniversary weekend was even topped off with a live performance by Steve and our own Jupiter String Quartet.

During ELLNORA 2019, Steve also brought his acclaimed podcast series Music Makers and Soul Shakers to the festival where he recorded a live session with fellow ELLNORA artist Molly Tuttle that Friday morning. Steve says of Ms. Tuttle, “Molly is at the forefront of young songwriters and pickers in Nashville, and I consider her to be one of the great new group of players who are writing and performing at an incredible level at a young age. Molly’s songwriting is adventurous and wide-ranging, while her guitar playing is firmly rooted in the bluegrass tradition. The mix is compelling and exciting to hear and is on display on her incredible new album When You’re Ready. She has been awarded the prestigious IBMA Guitar Player of the Year Award a couple of times already as well as Instrumentalist of the Year by the Americana Music Association. Molly joined me on stage, and we got to talk about her influences, her guitar style, and her recording process on her recent EP and the new album. We were confined a bit by time with the live aspect of the episode, but we crammed in what we could! Molly was also kind enough to bring her guitar along and show me some of the styles and influences we talked about as well as performing a couple of tunes.”

If you missed the live recording, now is your chance to listen in:
Music Makers and Soul Shakers: Episode 75—Molly Tuttle (Live from ELLNORA | The Guitar Festival)