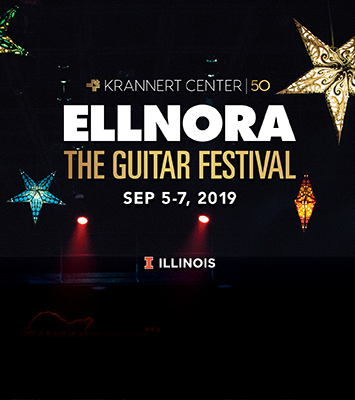 ELLNORA 2019 will be the eighth incarnation of the biennial festival, which began life as the Wall to Wall Guitar Festival in 2005. The nearly round-the-clock event provides an unparalleled multi-genre experience, now emulated by other festivals worldwide, and features performances from a diverse lineup of distinguished music makers.

ELLNORA | The Guitar Festival 2019, a cornerstone event of the Center’s two-season 50th-anniversary celebration, will take place Thursday, Friday, and Saturday, September 5, 6, and 7. The festival schedule will be announced in late April with tickets on sale Saturday, July 20 at 10am at KrannertCenter.com, by phone, and in person at the Krannert Center Ticket Office.