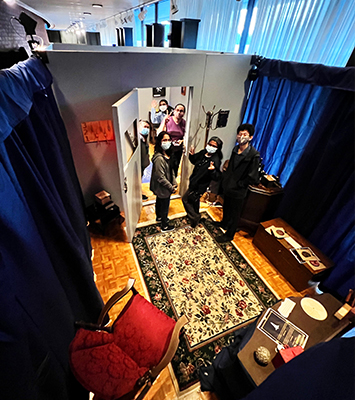 The instructors and students are gathered around a computer screen behind two temporary rooms constructed just off the lobby of the Krannert Center for the Performing Arts. I watch with them as they track via webcam the progress of the players in an escape room they have created.

The students playing the game are “trapped” in a haunted manor, and they must release the spirits of those trapped before them to escape.

The escape room—dubbed “The Haunting of Krannert Manor”—was created by students in a College of Fine and Applied Arts course in escape rooms as immersive theatre and an informatics course on escape room design at the University of Illinois Urbana-Champaign. The students in the FAA course developed the story and characters, wrote the script and used theatrical concepts to create an immersive environment. The students in the informatics course developed, manufactured and now are operating the escape room puzzles, including the hardware and programming of small board electronics.

The players are busy using the clues in the room to figure out a code and unlock a trunk. I peek through a curtain into the escape room and see the players standing in front of a Victrola. They are sorting through a stack of 45-rpm records, searching for the one to play to receive their next clue.

Course instructors Amber Schultz, a professor of stage management in the theatre department, and Emilie Butt, a lecturer in informatics and the CU Community Fab Lab instruction and engagement coordinator, tell me that developing the escape room helped their students learn about designing with and for others. The FAA students adapted their storytelling from focusing on artistic expression in a performance to ensuring it translated well to the experience of an escape room. The informatics students created the mechanics of the puzzles in a way that reinforced and advanced the story.

Both the story and the puzzles guide the players through the game, but these details must be designed to help the players become immersed in the experience, the instructors said.

“The players need to feel they have agency and are figuring something out. That aha! moment is so important in an escape room,” Schultz says.

The student designers also prepared for any problems that might arise during a game. For example, the Wi-Fi signal frequently is lost. During the game, Duncan Baird, an informatics instructor who co-teaches the class with Butt, checks a piece of electronic equipment to make sure it has reset the Wi-Fi. I look into the escape room to see that the eyes of a portrait on the wall are glowing. The electronic controller is working again.

The escape room puzzles are a combination of physical game pieces that the players manipulate to find a solution and electronics that create the magic of the game. The informatics students used near-field communication to allow each electronic device controlling part of the game to send a signal when its puzzle is solved. The signal triggers the next step in the game. For example, a radio in the room begins playing a recording of a spirit recalling the circumstances of its death, offering the players their next clue, or an electromagnetic lock is released and a door pops open, revealing something to help solve another puzzle.

Baird is monitoring a computer that tells him whether each electronic device is connected to Wi-Fi. When the players solve a puzzle that will light up a set of candles, Baird sees the candles haven’t reset to the Wi-Fi signal. He manually turns them on and sends a signal to the next electronic device, indicating to the players that the puzzle has been solved.

Phillip Burleigh, a sophomore computer science major and a student in the FAA class, plays the role of a helpful ghost. He sits in front of a microphone with a script, periodically reading a passage about the manor’s guests, providing more clues to the players. When the players’ progress stalls, he improvises to keep them on track.

“Professor, your tool may be the key,” he says in a ghostly voice.

We listen as the players just behind the wall call out numbers as they work to figure out a code that will allow them to escape the haunted manor.

Each time the players solve another puzzle, the students and instructors in the backstage area quietly cheer.