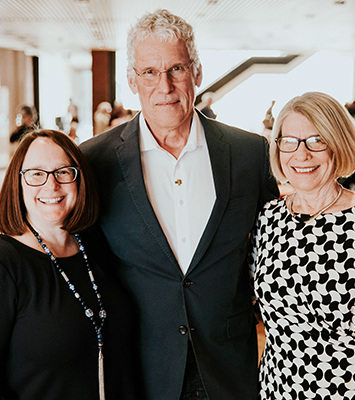 On Monday, March 25, 2019, Deborah Frank Feinen, Mayor of the City of Champaign, and Diane Wolfe Marlin, Mayor of the City of Urbana, joined Krannert Center for the Performing Arts’ leadership and supporters to recognize the Center’s long legacy and lasting impact as it celebrates its 50th anniversary. Both Urbana and Champaign have declared April 12-14, 2019, as the officially designated commemoration of Krannert Center’s historic 1969 opening. The joint proclamation follows.

WHEREAS, An extraordinary, generous gift from Herman and Ellnora Krannert to the University of Illinois created what is widely considered the nation’s leading university-based performing arts center; and

WHEREAS, Krannert Center for the Performing Arts opened its doors on April 19, 1969, providing infinite moments of deep joy, global understanding, and inspiring hope; and

WHEREAS, This five-theatre, multi-constituency state-of-the-art facility designed by Max Abramovitz is dedicated to the advancement of education, research, and public square; and

WHEREAS, the Center’s collaborative relationships with Dance at Illinois, Illinois Theatre, Lyric Theatre @ Illinois, and the School of Music present and educate the next generation of artists and research and develop new artist work; and

WHEREAS, the Center serves as classroom, laboratory, and public square for 300,000 visitors annually; and

WHEREAS, over 350,000 Youth Series attendees have enjoyed arts experience since the Series founding in 1982; and

WHEREAS, over 10,000 performances by local, national, and international artists have been presented since 1969; and

WHEREAS, the University of Illinois and the cities surrounding the Center fully support and revere Krannert Center for the Performing Arts as a jewel on this campus and in our community.

In Witness Whereof, we have hereunto set our hands and caused the Seals of the Cities of Champaign and Urbana to be affixed this 25th day of March, 2019.